EA announced a new Star Wars game titled Star Wars: Squadrons, a space battle game that’s operated in first-person. This game offers both single and multiplayer modes taking place “during the final days of the Galactic Empire and the rise of the New Republic after the events of Star Wars: Return of the Jedi.”. For the first time, we’ll also experience events that followed after the Battle of Endor.

While we don’t any actual gameplay, the cinematic trailer doesn’t disappoint with providing hype and provides some nostalgia for an old school classic I use to play on the PlayStation 2, Star Wars: Jedi Starfighter, which was originally developed and published by LucasArts before they closed down their internal game development division.

Star Wars: Squadrons is developed by Motive Studios who stated the following:

“We created this game for every Star Wars fan who has ever dreamt about soaring across the galaxy in their favorite starfighter,” said Ian Frazier, creative director, Motive Studios. “Through the collaboration of the teams at Motive and Lucasfilm, we’ve been able to create a high-fidelity starfighter experience with an authentic storyline that invites Star Wars fans to explore never-before-seen corners of the galaxy in their own ship. We’re excited to show all this in action at EA Play Live this week.”

Star Wars: Squadrons will offer a unique and immersive experience that we’ve never had before, expanding beyond what we’ve had with Star Wars: Battlefront and Battlefront 2. Some new experiences include player and ship customizations as you level (weapons, engines, cockpits, flight suits, and helmets), strategic gameplay, and epic 5v5 multiplayer fleet battles which include side missions as you play. You’ll also be able to experience locations such as Yavin Prime and the shattered moon of Galitan.

According to StarWars.com, we should be expecting the game on October 2nd for PlayStation 4, XBOX One, PC, and playable with virtual reality for the PS4 and XBOX One. You’ll also be able to play cross-platform between all supported systems! 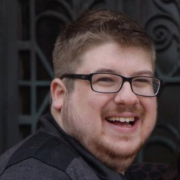 Managing Partner - If you look up the word “geek” in the dictionary, you won’t find a picture of Collin. The definition though is “an enthusiast or expert especially in a technological field or activity” which couldn’t describe him any more perfectly. Whether it’s music, movies, technology, or any other number of interests, Collin is a geek to the core. When he’s not spending time with his beautiful wife or son, Collin can often be found improving companies and their IT infrastructure at his day job. If he’s not there, find a computer or TV because you’re going to find him podcasting, researching new technology, playing video games, or watching either endless amounts of Chuck reruns or Star Wars.

Toy Story 4 – The Sequel That Reaches for the Sky